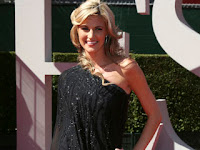 My heart goes out to Erin Andrews, the ESPN sportscaster whose privacy was grossly violated by some lowlife who thought it would be fun to video tape her in the privacy of her hotel room. Having been one who has had his privacy violated (not in that manner) but violated nonetheless and has a major pet peeve about crimes of this nature; I can only imagine how horrified and violated she must feel. I rarely watch the news and stories like this one are the reason why. To add insult to injury the reporter had the audacity to say that he was not sure that anything illegal actually occurred or if a crime had been committed. He went on to say that spy ware and spy paraphernalia sales are up. Look out folks!!! Big Brother and Big Sister are watching for kicks! No place is sacred or "PRIVATE."

According to USLegal.com, Invasion of privacy is defined as follows:

Invasion of privacy is the intrusion into the personal life of another, without just cause, which can give the person whose privacy has been invaded a right to bring a lawsuit for damages against the person or entity that intruded. It encompasses workplace monitoring, Internet privacy, data collection, and other means of disseminating private information.

Celebrities are not protected in most situations, since they have voluntarily placed themselves already within the public eye, and their activities are considered newsworthy. However, an otherwise non-public individual has a right to privacy from: a) intrusion on one's solitude or into one's private affairs; b) public disclosure of embarrassing private information; c) publicity which puts him/her in a false light to the public; d) appropriation of one's name or picture for personal or commercial advantage.

The Supreme Court has ruled that there is a limited constitutional right of privacy based on a number of provisions in the Bill of Rights and subsequent amendments. This includes a right to privacy from government surveillance into an area where a person has a "reasonable expectation of privacy" and also in matters relating to marriage, procreation, contraception, family relationships, child rearing and education. However, records held by third parties such as financial records or telephone calling records are generally not protected unless a specific federal law applies. The court has also recognized a right of anonymity and the right of groups to not have to disclose their members' names to government agencies.

The criminal voyeurism statute of some states cover "a place where [one] would have a reasonable expectation of privacy", meaning:

i.A place where a reasonable person would believe that he or she could disrobe in privacy, without being concerned that his or her undressing was being photographed or filmed by another; or
ii.A place where one may reasonably expect to be safe from casual or hostile intrusion or surveillance.
Given the similarity to voyeurism, a jury might find that placing a hidden camera in a certain location may amount to the torts of outrage or negligent infliction of emotional distress.

When cell phones with cameras were introduced, I was vehemently against the concept. Now in retrospect and in the grand scheme of things, the camera/cell phone is just a drop in the bucket compared to what is available to intrude into someone else's life now.

The question is why do we care so much about what "other people" are doing, particularly when it does not have an impact on our lives? That's why I personally don't understand why for what seems like an eternity that we have to keep hearing about Brad Pitt and Jennifer Aniston. (Okay that's another BLOG). But think about it, you may not be able to ever be comfortable in your hotel room, public bathroom or for that matter in some instances your own home because of the misuse and abuse of technology by our sick brothers and sisters. Voyeurism has been kicked up to the umpteenth power with the technology that is available and is being developed. All this critical thinker can say is, it is a sad shame that one cannot walk around in his/her hotel room and other places and feel comfortable. Look what we have become. According to the story anyone looking to link to the Erin Andrews footage downloads a virus to their computer. This is one time I hope something like that is true. Wouldn't it be great if every time someone was committing a crime they would be zapped? Until the next edition.
Posted by Marc A. Medley at 1:33 PM No comments:

I Second That Emotion!

In the words of Smokey Robinson and the Miracles, "I Second That Emotion!" If you want to know the emotion that I am seconding, please read Bill Cosby's words below.


'They're standing on the corner and they can't speak English.
I can't even talk the way these people talk:

Why you ain't,
Where you is,
What he drive,
Where he stay,
Where he work,
Who you be...

Everybody knows it's important to speak English except these knuckleheads. You can't be a doctor with that kind of crap coming out of your mouth
In fact you will never get any kind of job making a decent living.

People marched and were hit in the face with rocks to get an Education, and now we've got these knuckleheads walking around.

The lower economic people are not holding up their end in this deal.
These people are not parenting. They are buying things for kids.
$500 sneakers for what? And they won't spend $200 for Hooked on Phonics.

I am talking about these people who cry when their son is standing there in an orange suit.

Where were you when he was 2?

Where were you when he was 12?

Where were you when he was 18 and how come you didn't know that he had a pistol?

And where is the father? Or who is his father?

People putting their clothes on backward:
Isn't that a sign of something gone wrong?

People with their hats on backward, pants down around the crack, isn't that a sign of something?

Isn't it a sign of something when she has her dress all the way up and got all type of needles [piercing] going through her body?

What part of Africa did this come from??

I say this all of the time. It would be like white people saying they are European-American. That is totally stupid.

I was born here, and so were my parents and grand parents and, very likely my great grandparents. I don't have any connection to Africa, no more than white Americans have to Germany , Scotland, England, Ireland, or the Netherlands . The same applies to 99 percent of all the black Americans as regards to Africa . So stop, already! ! !

Brown or black versus the Board of Education is no longer the white person's problem.

We have got to take the neighborhood back.

People used to be ashamed. Today a woman has eight children with eight different 'husbands' -- or men or whatever you call them now.

We have millionaire football players who cannot read.

We have million-dollar basketball players who can't write two paragraphs. We, as black folks have to do a better job.

Someone working at Wal-Mart with seven kids, you are hurting us.

We have to start holding each other to a higher standard..

We cannot blame the white people any longer.'