Just as television in 1963 was able to move the Civil Rights Movement from a national issue to a world wide issue, television along with the Internet is placing the same spotlight on the issues of race and gun violence in 2012.  For those of us old enough to remember the turbulent Sixties, the world was able to see a horrific attack on young civil rights protesters by the Birmingham, Alabama, police. The world watched as the Birmingham Police Department decided to unleash police dogs on the unarmed protesters, while the Birmingham Fire Department decided to turn on fire hoses and hydrants to disperse the young black demonstrators, most of whom were children. Just by looking at T.V. you could virtually feel the force of the water coming out of those fire hoses pushing those young, black protesters down flooding streets like garbage swept away from the curb during a street cleaning.

Many are espousing that too much is being made over the recent Trayvon Martin case, the shooting death of a seventeen year old unarmed teenager by an "overzealous" neighborhood watch marshal. Many are saying would you all please just shut up about this case already, while others are saying "I don't see what the big deal is because it happens everyday; why this case?"  Well like the dogs and hoses televised in 1963, the 911 calls placed to the police by George Zimmerman have been heard around the world and the myriad "hoodie" protests have been seen around the world.  This case has indeed brought worldwide attention to the unnecessary killings that keep occurring particularly involving young African American males. The issue is bigger than race as there are multiple issues in this case. Fundamentally, the fact that Zimmerman is part Hispanic, racially places him in no different boat than Trayvon as Hispanics are viewed as a minority just as African Americans and in most cases share the same plight. This is much bigger than race. This is about gun violence, this is about mindsets, this is about needless fear, this is about making judgement without facts and about senseless laws that need to be changed. 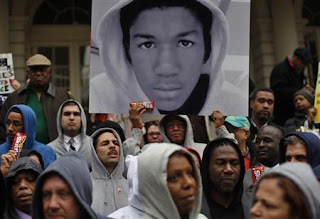 We cannot let up the pressure on this case. The Stand Your Ground Law does not make sense because if the tables were turned would Trayvon Martin been able to stand on the Stand Your Ground Law?  I doubt it very seriously. In fact, most likely Trayvon would be sitting in a jail cell for the very same reasons that George Zimmerman claims made him suspicious. He was wearing a hoodie.  The very same vilification that Trayvon is suffering in death would have been the same vilification he would have suffered in life as to why he was sitting in a jail cell for killing a neighborhood watch marshal in a gated community in Florida.  Just as Rev. Dr. Martin Luther King, Jr. wrote his letter from a Birmingham jail detailing why we cannot wait, the same applies in 2012 as to why we cannot let up and give in on this case. There are other cases like this, but none have received the worldwide exposure that this case has received, therefore providing us with an opportunity to gain worldwide support.
So for those who wish that this would just go away.... it can't.  For those who wish that we would just STFU.......we can't. For those who think that we are making too much of a big deal about this.......we are not. For those who think this is just about race....it is not.  We cannot let this die. We must remain vocal, visible, and vigilant until laws such as the Stand Your Ground Law is abolished and that mindsets are changed. Malcolm Gladwell does a very good job in describing what was going on in George Zimmerman's head prior to his pulling that trigger in chapter six of his book BLINK. (I encourage you to read it, if nothing else but that chapter).
We will not give up the fight!!!! The world is watching.
Posted by Marc A. Medley at 8:12 AM 1 comment: