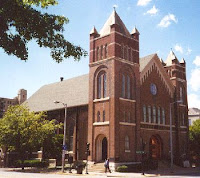 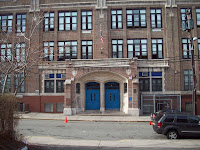 If there are ever two areas that ought to be leading the way it is our religious organizations and educational institutions. In other words, church and school. Yet, if we really critically take a look at the way of the world today, you will find that church and school seems to lag behind the rest of the world. The school system is still working for the most part off of the agricultural model, hence the scheduling between 8:15 a.m. and 3:10 p.m. This schedule was done to accommodate farming. The fact that we have summers off is not so much for the heat as it was/is again to accommodate the farming schedule. We have gone through the agricultural age, industrial age, and on through the technological age into the informational age and we still run schools the same way we did over a century ago. Technologically we lag behind corporate and other sectors of society that school ought to be at the forefront.
Many churches are not much better. Still doing things the same old way because that's the way we've always done it; not realizing that the message does not change, however, the method of delivering the message may change. We still drive cars, just not Model T's. For some reason, we feel we can do any old thing any old kind of way in church. The rules that apply to other areas for some reason don't apply to church. In many instances we treat our jobs better than we treat our church responsibilities and our alledged love for God. In cities such as Newark, Paterson, and Jersey City, there are churches sometimes two doors away from each other, and certainly on each corner (Particularly in Newark) and yet our world does not seem to be changing. It certainly begs the question are we as serious about education and the souls of others as we say we are? Critically think about it.
Posted by Marc A. Medley at 4:39 PM 2 comments:

A Picture is Worth A Thousand Words

A picture is worth a thousand words. Not even this Critical Thinker have the thousand words that the above picture expresses.
Posted by Marc A. Medley at 2:24 PM No comments:

During President-Elect Obama's presidential campaign he was oftentimes called "arrogant" and "elitist" because of the way he portrayed and carried himself from the time he set out to be President of The United States of America. (Gee, I wonder if the expectation was that he would be sagging, with his cap turned backwards or to the side and talking in Ebonics). This critical thinker finds these assertions interesting because in actuality Barack Obama was and is really about promoting excellence and it showed throughout his campaign. I even heard IMUS the shock jock known a couple of years ago for making disparaging remarks about the Rutgers women's basketball team, say that if Obama runs the country in anyway like he ran his campaign, that Obama and the country will be fine.
President Obama showed he was very familiar with the principal of "Act as if it were so" also known as "fake it until you make it," as he presidentially moved from venue to venue. He had his own seal; a seal that was displayed on his plane, his podium, his website, etc. etc. etc. He travelled abroad making speeches in places like Germany again looking and sounding very presidential. His acceptance speech for the nomination of the democratic nominee for president was in front of a setting that looked like the backdrop of the White House and his attire was always presidential as noted by Laura Ingram who said that Barack was always in a white shirt suit and a tie opposed to John McCain who was sometimes seen in a gray shirt or other interesting color combination.
Many of his pundits throughout the campaign touted how Obama was nothing more than a "community organizer," and what experience or know how did he have to run the country. They asked folks to name one achievement of Barack Obama and many played the stupid role and acted as if this man had accomplished nothing. O.K., let's go down that stupid road for a minute and say that Barack Obama had not accomplished anything; wouldn't it stand to reason that the fact that he had gotten as far as he did in a presidential race without accomplishing anything be an accomplishment in and of itself? Even the dullest critical thinker among us could figure out that Barack Obama is obviously an intelligent and qualified individual to be president of this country.
It's the skills dummy; the skills. The skills Barack Obama used to organize communities are transferable. As we were able to see him transfer these skills to run his campaign, he will undoubtedly transfer those same skills to run the country. So I am grateful to God that Barack Obama was a community organizer and I am even more grateful that God saw fit to elevate him from the "community organizer" to the "country organizer."
If I were President Obama, I would send a thank you card to Sean Hannity, Rush Limbaugh, Laura Ingram, Mark Levin, President George W. Bush, Sarah Palin, and possibly even the milder Bob Grant for constantly putting his name into the energy field. They focused so much on what they did not want (Obama as president) that they did not do enough to place enough energy towards what they did want (a republican conservative candidate). Barack Obama received more advertising from these folks then he could have paid for with all of the funds he raised.
Barack Obama showed true focus and faith. He constantly acted and Felt As If The thing had already Happened (F.A.I.T.H.) Praise God for his works in this campaign.
Posted by Marc A. Medley at 8:34 AM No comments:

“People in this country are ready for change and hungry for a different kind of politics and … for the first time in my adult life I am proud of my country because it feels like hope is finally making a comeback.” Michelle Obama

I join Mrs. Obama in being proud of my country as it elected its first African American president. People in this country indeed let it be known loudly and proudly that they were ready for change and hungry for a different kind of politics. This presidential race was unprecedented in the excitement experienced by both young and not so young. President elect Obama was elevated to rock star status not of his choosing, however, he had the wherewithal to go with the flow and utilize it to his advantage. President Obama knows his marketing. He knows the first maxim of “Know your audience.”

President Obama used technology to his advantage and I would highly recommend that he continue to use technological vehicles such as email to stay in touch with the American people. The use of technology and communication played a vast role in his ability to become the 44th President of the United States. By all means he should use this vehicle or something similar to keep his finger on the pulse of what the American people are thinking. I found this to be a wonderful way to voice my support and concerns. Even if it was not read by anyone, at least it gave me an opportunity to express myself concerning the campaign. People need to feel as if they have a voice and whether they did or did not; at least they had the appearance or the feeling of being able to be heard. I don't know what it costs to keep an online tool such as the one President Obama used during his campaign up and running, but I highly recommend that people have an opportunity to be in touch with their government beyond the usual gov.org sites.

I have great expectations out of the Obama team. I intuitively believe that President Obama is going to do for the White House what Tiger Woods has done for golf, Reginald F. Lewis did for Business, Michael Jordan did for basketball and what Serena and Venus Williams has done for tennis. In all of these instances, when the barrier was broken, each of these individuals became champions extraordinaire in their own rights. I expect President Obama to do the same.

As I walked around town with my "Obama" cap on my head, it seemed African Americans in particular held their heads up higher, smiled a little brighter and had a little more pep in their step. Perhaps because the reality is setting in that from this point on when we tell our children they can be anything they want to be, we can tell them that and mean it. No more excuses. If President Obama can do, then I can do it too. Hey who knows, this critical thinker may be president of the United States one day.
Posted by Marc A. Medley at 9:13 PM 1 comment: