Thinking Outside of The Box

How often do we hear the tired and overused cliche "Think Outside of the Box?" This critical thinker says to you, have we ever thought that maybe not enough thinking is going on inside of the box? Somthing to "think" about.
Posted by Marc A. Medley at 7:03 PM No comments:

Are We “ANTI” Everything?

Think about what you see around you every day. Jeans with shreds throughout the legs of the pants are sold; caps that are designed to be worn with the bill facing front are worn with the bill facing the back, the side, on the diagonal and any other way with the exception of the way the cap was designed to be worn.; pants are worn by boys, men and sometimes even girls and women sagging near the knees with the underwear showing and a demonstration takes place in Portland, Maine with women baring their breasts because they feel it is a double standard that men can walk around with no shirts on and they can’t. Even In politics, there seems to be an anti-incumbent sentiment amongst Americans.

There was a time when you would not be caught dead in torn and tattered jeans like the ones people are actually paying money for now. Some designer thought it fashionable to shred jeans in the legs and we are stupid enough to allow them to dictate to us that we must wear them or be square. I can’t tell you how many students have told me that they are wearing their jeans ripped to shreds because that is the way they are made. Think about that………money was actually spent for something that was at one time thrown away by self respecting people who would not even pick cotton or tobacco in dungarees that looked like that. Our pride is so low that a designer can come along and sell us ripped jeans and we are okay with that. “It’s the style.” The same holds true with wearing of the baseball caps any old kind of way.

The sagging of the pants is a different issue altogether. Please don’t tell me it’s the same thing as African Americans wearing afro’s in the seventies. It’s not. The exposing of one’s underwear is disgusting. I am not interested in seeing what pattern is on your boxers. Not to mention, have you ever watched these people trying to walk who wear their pants like that? It’s quite a sight to see the effort to manipulate the pants to stay up without falling down to the ground. Quite a show, it’s almost as if we are “anti-clothes.”

To further this “anti-clothes” observation,on yesterday (April 8, 2010), women marched topless in Portland, Maine without incident. The marchers wanted to call attention to the double standard in society's attitudes toward male and female nudity. Interestingly enough, some of the women became upset when the men stood around watching and taking pictures of them as if they were in a parade. Having spent some time in France some years ago where topless is the norm on beaches there, let me tell you everything going topless is not a pretty sight. I had a greater appreciation for why we have the laws that we have here in the U.S. after that experience. You could always tell the American men because they were standing around with cameras and you could always tell the American women because they had their tops on.

This “anti” everything spirit will not serve America well in the long run (and maybe not even in the short-run). Rev. Jeremiah Wright was blasted in the media for his comments about the difference between God blessing America and God damning America; but if you think about , to damn something means to curse or wish harm upon. If we continue down the road we are continuing, If God has not done so already as Rev. Wright suggests, He (God) just may. If you read your Bible, He’s done it before and He(God) did say, it won’t be water next time.......... Something to critically think about and as always I welcome your response.
Posted by Marc A. Medley at 4:38 PM 2 comments: 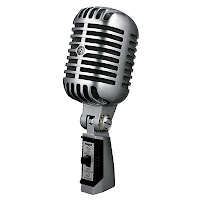 “This is a big f@$%^ing deal?” Vice-President Joe Biden

“I want to cut his nuts off” Rev. Jessie Jackson

As a radio talk show host and teacher of public speaking, I am amazed every time I hear about these high profile public figures making what they thought to be private remarks on open microphones. To make it all the worse, it is not as if the microphones were hidden or someone was spying on them; in each of these instances the perpetrators were right around the microphones. You would think they would know better based on the fact that they are around microphones for radio, television and speaking all of the time.

Again, having experience operating the sound board in a radio studio, the microphone is clearly lit when it is “hot” and unlit when it is not on. I make sure before I say anything in the microphone that I check to see if the microphone button is lit and I equally take the precaution to make sure the light is unlit and the volume is shut totally off before I say anything in the studio. I must admit, these gaffes by the likes of Joe Biden and Jessie Jackson have made me even that much more cautious when I am in the studio or anywhere near a microphone.

Did Vice President Biden not think the microphone would pick up his “This is a big f%$#ing deal" comment? What in the world was on his mind or not on his mind? Once again like with the sex scandals, one would think that each would learn from the other, but apparently that is just not the case. So, as with all of the sex scandals, let’s see who will make the next blunder around a “hot” microphone. Enjoy the videos or better yet, learn from them. Oh, and if you are wondering, the talk show is The Reading Circle with Marc Medley, heard live on Saturday mornings at 6:00 a.m. on WP88.7 FM and on www.wpradio887. org. As always, I welcome your thoughts and comments.