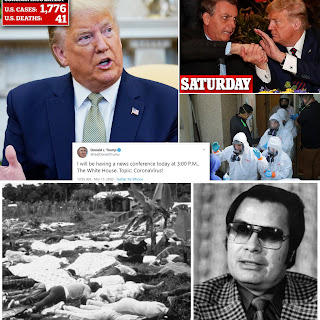 "Don't forget, no matter what others do, Think For Yourself."   Those words were a part of what my mom signed in my high school yearbook in 1980. In fact, she went on to say that that was her motto. As a child, this "motto" was drilled into me and my younger sister. This whole notion of not following the crowd when they were doing something wrong was taught over and over again in our home. In fact, when I and my sister were growing up, we were told that if a fight broke out in school or on the way home, that we had better not be in the crowd watching or trying to see what was happening. We were instructed to keep moving, go around it, or if necessary turn back and go in the opposite direction. In other words, we were not to get caught up in the crowd of onlookers.

I start this post with that based on our current crisis with Covid-19. Based on who far too many voters chose to follow [Donald J.Trump], we are losing lives to this pandemic because of that choice. We have the absolute worst combination possible with one of the most devastating viruses of our time coupled with one of the most inept leaders of our time, a leader that folks chose to follow knowing from the beginning that the man was corrupt and incapable of leading a country. There was red flag after red flag prior to the election of 2016 and yet like sheep, enough Americans voted for this man to take office. Even if the Russians interfered and Trump found a way to cheat, there still had to be enough voters voting for him in order for him to win. Russian interference and Trump's cheating alone would not have been enough to get him into the White House.

This is not the first time lives have been lost due to the followership of some cracked pot leaders who somehow convinced masses of people to do what they [the people] know was not right. They did not think for themselves. They allowed someone else to do the thinking for them. In 1978, Jim Jones was a so-called preacher, faith healer and cult leader who conspired with his inner circle to direct a mass murder-suicide of his followers in his jungle commune at Jonestown, Guyana. More than 900 Americans – members of a San Francisco-based religious group called the Peoples Temple – died after drinking poison at the urging of their leader, the Reverend Jim Jones. 900 people lost their lives because they did not have the ability to think for themselves. 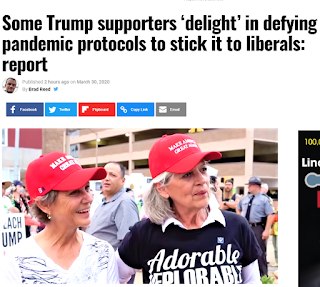 At the time of this writing, there are reports that some Trump supporters 'delight' in defying pandemic protocols to stick it to liberals. Placing yourself in harm's way.....that's really sticking it to 'em boy! This blind followership just does not make sense and really causes one to wonder what goes on in the minds of people who think this way. It is amazing how there are a significant number of people who willingly fall lockstep with a "leader" who is blatantly leading in the wrong direction. A leader who is unapologetically asking people to do what is unethical and immoral.  The fact that Trump was elected actually speaks more to the mindsets of far too many of America's inhabitants than it does of Trump. People are dying and the only thing Trump is concerned with is his television ratings. That is absurd, yet there are still people willing to follow such foolishness.

America is in a sad state of affairs based on who she chose to be her leader. Countries suffering as a result of their leadership choice happened in the Bible on more than one occasion. For example, in 1st Samuel, Chapter 8, Israel asks for a king so they can be like everyone else. Let's see how the story unfolds. Pay close attention to the highlighted areas.

8 When Samuel grew old, he appointed his sons as Israel’s leaders.[a] 2 The name of his firstborn was Joel and the name of his second was Abijah, and they served at Beersheba. 3 But his sons did not follow his ways. They turned aside after dishonest gain and accepted bribes and perverted justice.
4 So all the elders of Israel gathered together and came to Samuel at Ramah. 5 They said to him, “You are old, and your sons do not follow your ways; now appoint a king to lead[b] us, such as all the other nations have.”
6 But when they said, “Give us a king to lead us,” this displeased Samuel; so he prayed to the Lord. 7 And the Lord told him: “Listen to all that the people are saying to you; it is not you they have rejected, but they have rejected me as their king. 8 As they have done from the day I brought them up out of Egypt until this day, forsaking me and serving other gods, so they are doing to you. 9 Now listen to them; but warn them solemnly and let them know what the king who will reign over them will claim as his rights.”
10 Samuel told all the words of the Lord to the people who were asking him for a king. 11 He said, “This is what the king who will reign over you will claim as his rights: He will take your sons and make them serve with his chariots and horses, and they will run in front of his chariots. 12 Some he will assign to be commanders of thousands and commanders of fifties, and others to plow his ground and reap his harvest, and still others to make weapons of war and equipment for his chariots. 13 He will take your daughters to be perfumers and cooks and bakers. 14 He will take the best of your fields and vineyards and olive groves and give them to his attendants. 15 He will take a tenth of your grain and of your vintage and give it to his officials and attendants. 16 Your male and female servants and the best of your cattle[c] and donkeys he will take for his own use. 17 He will take a tenth of your flocks, and you yourselves will become his slaves. 18 When that day comes, you will cry out for relief from the king you have chosen, but the Lord will not answer you in that day.”
19 But the people refused to listen to Samuel. “No!” they said. “We want a king over us. 20 Then we will be like all the other nations, with a king to lead us and to go out before us and fight our battles.”
21 When Samuel heard all that the people said, he repeated it before the Lord. 22 The Lord answered, “Listen to them and give them a king.”
Then Samuel said to the Israelites, “Everyone go back to your own town.”

Referring to the Bible again, The Ten Plagues of Egypt (10 disasters that God brought on Egypt when Pharoah refused to let the Israelite nation leave; water turning to blood, frogs, lice, flies, livestock pestilence, boils, hail, locusts, darkness and the killing of firstborn children) is another example of the sufferage of a country due to its leader. What's to say that this Covid-19 is not plague number one in our modern era? With Trump as our leader, there could be more to come.

I couldn't imagine anyone voting for Trump in 2016 and after everything we have been through with him as our leader, I really can't imagine anyone voting for him in 2020, yet there will be those who for some reason do not have the capacity to see that what the man is doing is wrong. He only cares about "he, himself and he." So goes the head, so goes the rest of the body. America is sick today because it is sick at the top.