How Did Stuff Become More Important Than A Human Life? 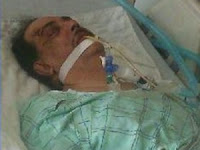 It is rare nowadays that I watch or listen to the news or read the newspaper. I stopped because really the only thing that changed from day to day was the date on the top of the newspaper or the date of the newscast. The crimes and negative actions were the same. Now when I say stopped, I don’t mean completely as I do skim enough to keep current with what is going on in the world and enough to be conversational about any topic. Much of what I learn about what is happening in the world I gather from talk radio or one of the various social media forums. But this morning while I had a little time, I checked one of my news apps on my Ipad and came across a story that truly saddened me. Not because I had not heard of stories like this before, but because I had and far too often. It was the story of a man losing his life over a material possession; a car.  The story read as follows:

NEW YORK(CBSNewYork) — A school bus driver who was in a coma after being beaten by an angry motorist, died on Friday night. Juan DelValle was taken off of life support shortly after 6:00 PM. DelValle’s bus accidentally side-swiped a parked car, sending the owner into a punching and knocking rage that sent DelValle to the ground, with his head hitting the pavement. Doctors said he has permanent brain damage and his family could take him off life support later this week. A surveillance video captured the entire incident, in which the driver of the car punched DelValle and sent him flying into the pavement. DelValle was planning to retire from driving the school bus at the end of this school year. His family is waiting until after an autopsy is complete, to plan a funeral.

As I read the story, my heart went out to that family who has now lost a husband, a father, a grandfather, an uncle, cousin, friend, etc. etc. because  he accidentally side-swiped a parked car. The operative word is accidentally.  Do I understand how one could be angry because his/her vehicle was damaged? Yes I do, but to the point of getting into enough of a rage to kill someone because of it? No I don’t.  On Thanksgiving Day 2010, my truck was totaled while parked on the street by someone who was either drunk or just lost control of their vehicle and while I was not happy about the loss, I did not seek to beat anyone down much less kill the driver. My insurance company took care of it and in fact I wound up with the same model and year of the vehicle I had lost.
What can this car owner possibly say to the DelValle family? In my mind…….. nothing. There are no words or excuses to explain his behavior or the loss of Mr. DelValle’s life. Ironically, Mr. DelValle was looking to retire and most likely was on nearly his last run. I am sure he and his family had plans to enjoy his retirement, plans that are now dashed as a result of one senseless act because of a material possession. When are we going to learn that we can replace things, but we cannot replace people?  This is a sad story but what makes it even sadder is the fact that it is happening more and more frequently. Folks we can replace stuff but we cannot replace lives. Something to critically think about.  I invite your response as always in the comment section of the blog.

There Is A Difference Between Discipline And Abuse

In light of the recent news concerning Creflo Dollar and the disciplining of his daughter, I purposefully have not read the story or enquired to find out the details because without even having done that, I know that the focus is on the disciplining aspect to the point of it being confused with abuse. There is a difference between discipline and abuse and that difference has become so blurred that our children feel they have some sort of leverage over us as their parents.

Now do not get me wrong, because I know someone reading this is going to interpret incorrectly that I am advocating for abuse, when indeed I am not. Let me state that again, I am not advocating for abuse of any kind toward a child or an adult. If you are reading this and was an abused child, I say again, I am NOT advocating abuse, so please do not go there with me.   The blurring of the abuse/discipline line however is causing some serious issues. Children who are being disciplined for rebelling or just flat out being disobedient to their parents feel that they can do what they want to do and when consequences are levied they can call 911, the police, or the Division of Family and Youth Services (DYFYS). I say again, in abuse cases that warrant these types of calls, by all means they must be placed, but what I am focusing on in this post are the calls that are placed for disciplinary actions that are not extreme or fall into the category of abuse.

I do not believe in the theory that a child can never be spanked. There are times when a spanking or tapping is indeed necessary to curb future incorrect behavior. In fact, had some light tapping or spanking occurred when the child was a toddler, most of the issues that we have with them as teenagers would never have begun.  Unfortunately, too many of us think that wrong behavior as a toddler is “cute” when in fact the incorrect behavior needed to be addressed at that time. It is not cute for toddlers to be writing on walls or scarring up furniture. It is not cute for toddlers to be touching articles on coffee tables or shelves when visiting someone else’s home or breaking things in a store and a tap on the hands or bottom to discourage this behavior is not abuse.

We give our children license early on to be disrespectful, discourteous and what we used to call “spoiled” and then when the child is older and discipline is needed, the child cries “foul” and calls the police.  As a child it was not on my radar screen to even think about calling the police or DYFYS on my parents and yes they did use the belt from time to time depending on me or my sister’s infraction. It was also dependent upon how many times we had been told not to do whatever it is that we were being disciplined for. It was never just the receipt of a spanking as a result of a first infraction or just for the sake of spanking. You can believe we had been warned on several occasions before the belt was brought out. In other words either I or my sister chose to not listen to what our parents had told us to do or not do on multiple occasions before the disciplinary action was taken.  The belt did not kill us because it was not used in an abusive manner. Some believe or think that any disciplining is abuse. I am not one who believes that.  “Time Out” does not work for me. It was rare that any of my children or me for that matter received the belt, but when we did, we knew not to do whatever it was we were being disciplined for again.  When I was talking with my mother the other night about the Creflo Dollar incident, her reaction was, based on what is happening today, in our day we would have all been put in jail and as I stated earlier my parents were not abusive.

Children know how to play two ends against the middle. They know how to play mom against dad or the police against both; our system has taught them that game.  As I said early on concerning the Dollar case, “I don’t know the facts of the case, but I do know fifteen year olds.”  They can be rebellious, they can be hardheaded, they will feel that they can do downright what they want to do because there is nothing you as a parent can do about it because if you do I will call the police or DYFYS.  I have heard stories of eight year olds running the house because the parents are afraid of a call to DYFS. I have heard stories of teenagers who let friends into the house and 3:00 a.m. or leave the house at that time and the parents don’t say anything because they are afraid of a call to DYFYS.  That is ridiculous.

Parents cannot and must not abdicate their responsibilities because of a fear of a phone call being placed to the police or DYFYS. Nowadays parents cannot even discipline their children in a public setting such as supermarket or department store for fear of someone filming the interaction on his/her cell phone and forwarding it to the police or posting it on YouTube.  So at this point I am not defending Creflo Dollar’s actions or his daughter's, but as I said earlier, I don’t know the facts, but I do know fifteen year olds.  The bottom line is our children must begin following the directions of their parents and stop being so rebellious and blatantly disobedient. The life they save may be their own. I was a fifteen year old once and I know how it is to be that age, but the times are so different now that the things I might have wanted to do or gotten away with would not take my life compared with how easy people are losing their lives as a result of their decisions and activities today.  As always I welcome your commentary in the comment section of the post.
Posted by Marc A. Medley at 7:01 PM No comments: