Why African Americans Ought Not Ever Purchase or Wear Ripped and Torn Cl...

Why African Americans Ought Not Ever Purchase or Wear Ripped and Torn Clothing of Any Kind : An Opinion 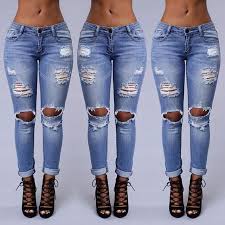 Now I know many of you before you even get started reading are already turned off by the title. Many of you are already defensive and are asking yourself the question, "Who is he to say what I should or should not buy; wear or not wear?  So, before we get started, I need everyone to understand that this is an opinion piece, an "Op-Ed," if you will and by the time I finish, I hope you'll have a better appreciation and understanding for why my opinion is what it is especially concerning African Americans.

As African Americans, we ought to intentionally not purchase any clothing that is ripped, torn and tattered based on our history and struggle. Therein lies the issue, as too many of us don't know or don't care about our history because if we did, there is no way in the world we would be rewarding designers and retailers, making them wealthy by purchasing merchandise that is already damaged upon receipt. Yet we do because we have been programmed and brainwashed that we must be in "style." If some artists wear it or some designer designs it and deem it the "style," then we feel that we MUST partake. We want to be "Down."  I hear it all the time from both young and old alike; child and adult alike; professional and non-professional alike, "It's the style" as if that makes it so. We need to understand that all styles that are created are not necessarily in our best interest. Most of the "style" creations are about the "almighty dollar," and we need to be wise as to how, when and where we spend our dollars.

Most of the ripped clothing that I observe usually falls into the dungaree or denim category. Usually, they are jeans [pants] that have shreds or worn out holes in them. The frayed strings are usually hanging from the holes, looking authentically worn and ragged. The clothing, however,  is not just limited to jeans or denim wear. I've seen shirts, jackets, vests, and even gloves that did not "wear out" from use but were a point of purchase sale with the consumer walking out of the store with clothing merchandise that is literally damaged goods. 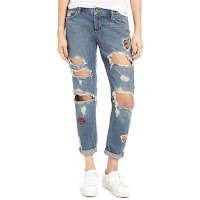 Historically, denim was and still is the traditional fabric for workwear.This is significant especially for African Americans as it was the clothing if any clothing were given or could be afforded that was worn by us as we were tenant farmers who gave a part (in too many instances it was not a part, but the whole) of each crop as rent. It was the clothing worn by us as we built this country virtually wage free. It was clothing worn by many who just as we have those slits in the jeans today were receiving very similar looking slits in their backs from whips cutting into their skin. The breaks in the skin are eerily similar to the breaks in the fabric.

For many of us, when our clothing came to the point of looking torn, tattered and raggedy, it was because we had worn the item so much that it just did not have anything else to give and therefore burst from exhaustion and distress. The material had been worn so much that it did not owe the owner anything else other than to be placed in the garbage, burned or to be used going forward as a rag. The clothing became ripped from being passed down and handed down over and over again. Passed from one child to the next, from one family to the next from one body to the next wherein each case the recipient had nothing else to wear but that item.  It was worn daily and in many instances scrubbed and hand washed each night. The owner in many cases, ashamed and embarrassed to be seen in torn and raggedy clothes. Just thinking about it as I write this piece, makes me want to cry.  The tears are welling up and I am fighting to hold them back at the thought of how we cavalierly parade around with clothing that looks like the clothing described in my brief history lesson above. It's almost like a double rape. We were raped when we had to wear that clothing and now are being voluntarily raped as we purchase these items making some designer wealthy, all in the name of "style." We consciously choose to look raggedy. I don't apologize for my view because that conscious decision to look dirty, torn and tattered when you do not have to, just does not make sense to me. There was a time when our clothes were indeed distressed due to overuse but for most of the folks that I observe flaunting this "style" today, that is not the case.

As African Americans, when do we say "To hell with style and rise up to a standard of excellence? When do we realize that dressing well, speaking well, and carrying ourselves with pride are all connected and are all in our history as we come from kings and queens?  In my eyes, the conscious choice to wear ripped clothing does not depict pride. In fact, for me, it displays just the opposite. It sends the same sorry message as the sagging of pants; the refusal to become educated; the calling of each other "nigga"; the wearing of the baseball cap to the side or backward; the covering of an entire body with ink; the happiness with being slack or mediocre; the acceptance of living in squalor; the senseless killing of each other, and the list could go on. None of the aforementioned exhibits pride or excellence.  We have an entire movement now known as "Black Lives Matter," and while the hashtag and title are cute and indeed significant, we must begin to act within the African American community like our lives matter. We must stop subscribing to everything that comes down the pike. We must recognize foolishness for what it is. We cannot be shouting and walking around with signs and then acting counter to what we are shouting about and fighting for.

One of my most favorite people who walked the face of the earth said it thusly, "There can be no deep disappointment where there is not deep love." I have a deep love for life. I have a deep love for human beings and I have a deep love for African Americans as I am one; it is for this reason that I am able to write this piece with such passion and conviction. As I observe so many of our [African American] behaviors and activities, I become deeply disappointed. The wearing of ripped clothing is just one example of things that we do that deeply disappoint me as a member of the human race and as a member of the African American race. Ironically enough, the person I referenced above came out of his suit and tie and put on blue jeans, but for an entirely different purpose and to send an entirely different message. The following is excerpted from a historical profile written by Oscar Schwartz about him:

The atmosphere was strained. They debated loudly, shouting over one another. “This is not where we belong,” a middle-aged minister shouted. “We belong back with our families, in our churches.” The exception was a young man with gentle almond eyes called Martin, who slouched in an armchair in silent contemplation. While the debate circled endlessly, Martin quietly stood up and walked into his room, closing the door behind him. Moments later, no longer wearing his black suit, Martin walked back into the room and everyone became silent. He was wearing blue jeans and a sweat shirt. These were not clothes to go to Church in. These were clothes to march in; clothes to go to jail in.

For the record, I would like to add that the jeans Martin walked back into the room wearing were not torn or tattered. I hope by now you will have said to yourself that this is indeed something to critically think about as this blog is THE CRITICAL THINKER. I do not care if you agree or disagree with me, but I do ask that you at least give the information provided in the post some thought. I also ask that you share the post and pass it along as a discussion starter. If you choose to spend your money on damaged goods at the point of purchase, then so be it. As for me, I will never purchase a piece of clothing that is already ripped, torn, dirty or tattered and I don't care what the style dictates.

Hear me live on Saturdays as I interview authors from around the world as I host The Reading Circle with Marc Medley, a book talk radio program. The show kicks off at 6 a.m. Eastern Time on gobrave.org and on FM Radio 88.7 FM in northern NJ communities. You are also invited to follow me on Twitter @thinkcritical01 and @readingcircle01.