Where In The World Do We Find The Most People With Tattoos? Think You Know?

I was listening to the radio in my car on Friday morning (6/29/18) and a similar question to the title of this post was raised. I am paraphrasing but it went something like, which country on a per capita basis had the highest population sporting one or more tattoos? Callers called in guessing which country it might be in the hopes of winning whatever the offered prize was for the correct answer. I listened hoping that the answer would be given before I reached my destination and lo and behold it was. I was guessing in my mind and even thought maybe the United States might have had the highest based on what I see around me on a daily basis. I listened as the DJ's told caller after caller that he/she was wrong until finally one caller gave the answer of Italy and was told that she was correct. The DJ's proceeded to give the top three countries of which the U.S. placed third.  Alrighty, get ready to place this in your "I don't know why I need to know this" trivia file; the top three countries are (1) Italy-48%, (2) Sweden-47% and (3) the United States-46%. 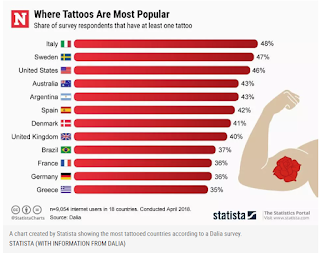 I had been looking for an angle to post about tattoos and tattooing and this survey and radio show contest provided me with the opportunity. Tattoos are not my thing as I have no interest whatsoever in turning my body into a canvass; however, as the data suggests, there are many who do. In this arena, I say, to each his/her own. You won't be finding me with anything permanently inked on my body.

Being open minded I decided to look up the history of tattoos and tattooing. According to Wikipedia, the free encyclopedia (and I cross-referenced it with other sources as I know in some instances Wikipedia may not be totally accurate, but in this case it is):


Tattooing has been practiced across the globe since at least Neolithic times, as evidenced by mummified preserved skin, ancient art and the archaeological record.[1] Both ancient art and archaeological finds of possible tattoo tools suggest tattooing was practiced by the Upper Paleolithic period in Europe. However, direct evidence for tattooing on mummified human skin extends only to the 4th millennium BC. The oldest discovery of tattooed human skin to date is found on the body of Ötzi the Iceman, dating to between 3370 and 3100 BC.[2] Other tattooed mummies have been recovered from at least 49 archaeological sites, including locations in Greenland, Alaska, Siberia, Mongolia, western China, Egypt, Sudan, the Philippines and the Andes.[3] These include Amunet, Priestess of the Goddess Hathor from ancient Egypt (c. 2134–1991 BC), multiple mummies from Siberia including the Pazyryk culture of Russia and from several cultures throughout Pre-Columbian South America.[2]

Other "Did You  Know?" facts from History of Tattoos  include:


So, for those of you who are tattooing for whatever reason, you are in good company. Nearly half of the United States population of consenting age has at least one or more tattoos. It's not for me but for those of you who love it, more power to you. I would love to hear your thoughts in the comment section of this blog or on Twitter @thinkcritical01 or @readingcircle01.

I invite you to join me live each Saturday from 6-9 a.m. Eastern time as I webstream around the world on gobrave.org and broadcast on FM radio in northern New Jersey and New York City on WP88.7 FM.