There Are A Lot Of Things Wrong With This Picture 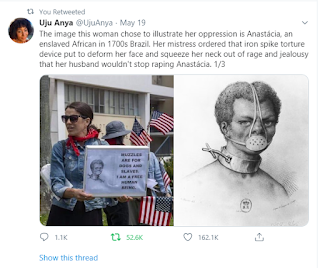 I was scrolling through my Twitter feed and came across the post you see in the picture to your left. Immediately the "What's wrong with this picture?" phrase arose in my mind. I noticed the layout of the two photos before I read @UjuAnya's words written above them.
I hadn't gotten to the words in the post because I was fixated on the words that appear on the sign "MUZZLES ARE FOR DOGS AND SLAVES. I AM A FREE HUMAN BEING."

I cannot express for you here in this blog post the mix of emotions and thoughts that seeing that woman carrying that sign with those words, brought up within me. Follow me here in the story and keep in mind my emotions began stirring BEFORE I read the words or shall I say the history lesson above the photos given by Uju Anya. I was already silently yelling "The last time I looked, slaves were human beings too!"  at the red bandannaed, sunglassed clad caucasian woman holding the sign. I was yelling at her for placing the slave woman and a dog in the same category while identifying herself as a "free human being." I found myself still yelling at this woman with the question, "So, a free human being is a human being but an enslaved human being is not a human being?" Yeah ok, message received. I was literally yelling at the computer screen.  I noticed how in that woman's eyes a slave and a dog are in the same category.

Now, I have already addressed the issue of our having to shelter-in-place for our safety being compared with slavery and the right to protest and attempt to force states to re-open being compared with the Civil Rights Movement in a previous blog post I HAVE HAD IT WITH THE NAMES OF ROSA PARKS AND MARTIN LUTHER KING, JR. BEING INVOKED IN THE STAY AT HOME ORDER PROTESTS and podcast Why We Cannot And Must Not Compare Our Current Health Precautions With Slavery And Anti-Lockdown Protests with the Civil Rights Movement, so I am not going to rehash that here. You can liken this latest atrocity to being in the same ballpark but sitting in different sections of the stadium. This pictorial layout in the Twitter post and the wording of the sign are historically and presently indicative of what far too many people believe and it is because of these beliefs that we are experiencing and witnessing these aberrant behaviors. Folks have become empowered and emboldened due to the behavior of the current president. Hatemongers are living vicariously through Donald Trump's vanity, insensitivity, roughness, and rawness. They secretly wish they could do what he does, so to them he is their hero.

When it comes to our racial history in terms of the interactions between Caucasians and African Americans/People of Color, I am nowhere close to naive and was not shocked by what I was seeing in that Twitter post. Shocked, no. Saddened, incensed, insulted, enraged; yes, hence the mix of emotions I was referring to. Nor am I playing the "race card." If anyone is playing the race card, it is the woman comparing herself to a black slave who in her mind is not human and holding a sign referring to her "free" whiteness also known as "white privilege." Her wording, not mine. If you are following me, then you know I have not arrived at the point in the story where I read the words ABOVE the photos.

After re-reading and yelling at the computer screen, my eyes went above the photo and read the history of Anastácia the slave woman. When I read the words "Her mistress ordered that iron spike torture device put to deform her face and squeeze her neck out of rage and jealousy that her husband would not stop raping Anastácia," that's when I saw it. Saw what? Well, I'm glad you asked. I saw the pattern. The same exact pattern that I'm seeing from Donald Trump in terms of Barack Obama, or George Zimmerman and Trayvon Martin, or the recent Ahmaud Arbery slaying and so many countless others. The same pattern. Blame the African American for something that is being done to him/her. It was the mistress's husband who was doing the raping yet the mistress took punitive action against Anastácia the victim and not her husband the perpetrator. Donald Trump since his Birther nonsense has been placing the metaphoric iron spike torture device to deform Obama's face and squeeze his neck out of rage, jealousy, and racism. Like Anastácia, Obama was raped by Mitch McConnell when Mitch proudly proclaimed that they were going to block everything Obama put in place and make him a one-term president. Mitch and the crew blocked what they could over the eight years (two terms) and what they didn't block then, Trump has been overturning since he has been in office. Again, only because Obama is an African American man. Donald Trump is obsessed with overturning and obliterating everything Barack Obama put into place not because it was necessarily bad, but only because Barack Obama is an African American. He is pathologically lying and making things up about Obama when in reality it is him [Trump] who is the incompetent one.

Think about that for a moment, Anastácia was tortured for having to suffer the torture of multiple rapes. She was now wearing a torture device as a result of her being raped! We continue to see the same thing happening to People of Color by white supremacists in 2020. The woman in the photo had absolutely no problem at all carrying a protest sign that defined herself as a human being while implying that a slave was not a human being and at the same level if not less than a dog. I'm sure she is a very fine person.

Yes, there are a lot of things wrong with that picture and I bet if folks were asked to pick out what was wrong, they could not. Sadly, it is in the DNA. It is in the subconscious. It is in the subliminal.
Posted by Marc A. Medley at 7:47 PM