We Must Be Historians 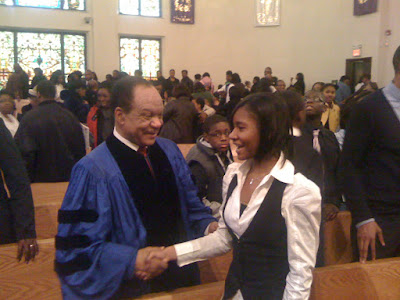 "We must be historians." These words were uttered today at the St. Luke Baptist Church in Paterson, NJ where Rev. Kenneth D.R. Clayton is the Sr. Pastor, by former United States Congressman and Pastor Emeritus of New Bethel Baptist Church in Washington, D.C., Rev. Walter E. Fauntroy. Rev. Fauntroy was the guest preacher for Heritage Sunday Worship at St. Luke and what a powerful message he delivered. Which brings me to this edition of The Critical Thinker.

As today being February 28th marks the close of February and the end of the month known as Black History Month, it is critical that each of us realize that the understanding of; the study of; and the reflection upon black history cannot be limited to one month alone. Black history, particularly for African Americans and in some respects even more so for everyone else must become a part of our daily lives. African Americans make history every day. It is sad to think that the only time we pause to reflect upon the contributions of African Americans is on Rev. Dr. Martin Luther King Jr's birthday in January or just during the month of February. It is for this reason that Rev. Fauntroy's words struck a chord with me when he said in this mornings service that we must be historians. I knew when he said it and I heard it that it would be the title for this blog. I had already begun writing on my various sites to remind people that just because February is coming to a close, our recognition of our history must not. We must learn more and more about our ancestry every day. We owe that to our forefathers and foremothers. I would not be sitting in the Principal's seat today if it weren't for those like Rev. Fauntroy who paved the way.

I watched Brenda Blackmon last night host a segment on Black History and when some were interviewed on the street concerning what Black History Month and Dr. King's birthday meant to them, many of them said it is one time throughout the year to pause and reflect on the history of African Americans. It was with these statements that this critical thinker took issue. We must not just pause for the twenty eight days in February and the one day in January. We must reflect upon and act upon our heritage the remaining three hundred and thirty six days as well. During the segment last night, just as I did this morning,I learned so much more about our history. Even the history of slavery in New Jersey. During the segment I also gained and ever greater appreciation for the sit ins at Woolworth nearly fifty years ago.

So for those reading this edition of The Critical Thinker,and not just those of us who are African American, we must understand our history in order for us to move forward and not repeat the mistakes of the past. We must take on the same spirit as our Jewish brothers and sisters whose mantra is "Never Again;" and teach our children and many of our adults about our history and not just the horrible parts; African Americans are descendants from Kings and Queens. That story must also be told. So I end this edition as I began in the words of Reverend Congressman Walter E. Fauntroy....."We Must Be Historians."
Posted by Marc A. Medley at 11:35 AM No comments:

From Hosanna Hosanna to Crucify Him or From Hero to Goat 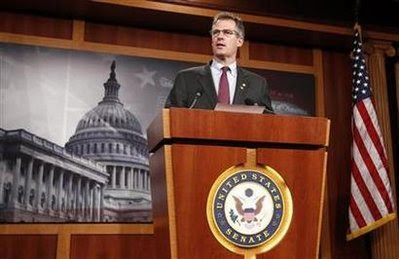 9And the multitudes that went before, and that followed, cried, saying, Hosanna to the son of David: Blessed is he that cometh in the name of the Lord; Hosanna in the highest.

13And they cried out again, Crucify him.

Upon Republican Senator Scott Brown's victory in Massachusetts, the conservative trinity (Rush Limbaugh, Sean Hannity and Mark Levin) were crying out Hosanna in the highest about him; then he cast his first vote and they cried out again, crucify him. The last cry came as a result of Senator Brown's vote this week for a $15 billion jobs bill drafted by Senate majority leader Harry Reid. By voting with the Democrats, he stunned the trinity and some conservative supporters.

I heard Levin and the other two cronies lament how now Scott Brown is not conservative enough. Mark Levin went as far as to say that the conservative movement is not about one person. That wasn't the cry a couple of weeks ago when Senator Brown won. It's amazing how fast you can go from hero to goat with these guys; how quickly you can get on the "S" list because you don't think the way they think. Critics ripped into the 41st GOP senator on Facebook and other sites when he became the first Republican to vote with Democrats on the jobs bill calling him a “traitor.”

Good for Senator Brown! He voted with his own mind and conscience. When asked why he voted the way that he did, he said that he voted for the bill, over the concerns of GOP leadership, because “it’s filled with tax cuts that will help create jobs in Massachusetts.” Again, I say good for you Senator Brown. Hopefully he does not become anyone's puppet.

The United States will never get anywhere as long as we keep playing the same old tired politics as usual. We will never get anywhere as long as the parties continue to war against each other. A divided house cannot stand against itself and as long as we keep running along constantly pointing fingers at the left or the right; the democrats or the republicans; the conservatives or the liberals, etc. etc. we will continue to be a divided house and noting will get done. I encourage and challenge readers of this blog to read GAME CHANGE by John Heilemann & Mark Halperin and OUTRAGE by Dick Morris & Eileen McGann to get some real good insights into what Washington is really all about. After completing these books you will see it is not about the American people.
Posted by Marc A. Medley at 7:40 PM No comments: 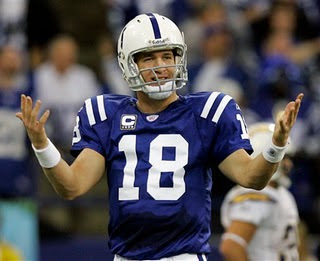 C'mon Peyton, you've been in the game of football long enough to know that it is only good sportsmanship and customary to congratulate the winning team members or at best shake hands with them and say "Good game." We witnessed the same juvenile behavior from Lebron James at the end of the National Basketball Association (NBA)championship game. (see It's Only a Game Folks) http://thereadingcircleblog.blogspot.com/2009/06/its-only-game-folks.html

Just as with the James incident the Manning incident is magnified because of the star status of these two men. These are the guys who have been placed on pedestals because of their athletic prowess. It would be wrong regardless of who did not display good sportsmanship, but it really gets magnified with a big name in a big game, i.e. James-NBA Finals; Manning- Superbowl. While the role model debate always crops up in these situations, the fact of the matter is, we are all role models whether we like it or not. Children watch, and as sassy and smart mouthed as many of them can be today, they would have no problem with not shaking an opponents hand after a game and then nastily telling the coach "Well Peyton Manning didn't shake hands after the Super Bowl or Lebron James didn't shake hands after the NBA Finals and neither am I." This applies to even the eight year olds in the Pop Warner leagues. Oh yes, I can see that happening. As the principal of an elementary school, I had an incident where at the end of a basketball game one of the cheerleaders from the opposing school came up to me and informed me that the cheerleaders from my school would not shake their hands. Our cheerleaders had already made their way to the locker room and I called each one back out and had them shake the opposing cheerleaders hands. Let's get real, when all is said and done, it is only a game.

What makes it even worse is that Peyton Manning is portrayed as Mr. America; Mr. Purebread (male version of Polly Purebread for those of you who are cartoon buffs); The Great White Hope,etc. etc. etc. Kids are actually encouraged to look up to him. I was actually rooting for the Colts in the Superbowl because of Coach Jim Caldwell's deep faith in God and his not being shy to share his faith even during his myriad interviews. I also counted on Peyton Manning's experience to be a factor. When the game was over and I had to face all of my friends who were cheering for the Saints, I could not help but to admit that the Saints played an excellent game. The Saints played as if they wanted to win and they did. That's all Peyton had to do was let some of the Saints players know that it was a good game and go on into the locker room. Calling Drew Brees later does not cut it because the cameras aren't there to catch that phone call. If the situation had been reversed everyone would have been questioning how could they do that to "Peyton Manning?"

I am not suggesting that these guys ought to be perfect; however, they need to always be mindful that people are watching their every move. 106 million households were watching; the largest audience in television history, so I don't think that was the time to throw a temper tantrum. Oh well something else to critically think about.
Posted by Marc A. Medley at 6:15 AM No comments: