Two Sportscasters Who Did It Well 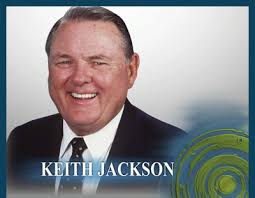 I start this post with this quote because it is the eighty-ninth birthday of Rev. Dr. King, Jr. and because over the last couple of weeks we lost two sportscasters who we can all say "Here lived two great sportscasters who did their jobs well." I am speaking of Dick Enberg and Keith Jackson. The two stand out for me because throughout my childhood, teen years and adulthood, those two were the voices of so many sporting events that I watched over the years. They were both legendary and had distinctive voices, cadences, and catchphrases. Both delivered play-by-play of major American sports, memorable games and events. Their voices were known just as Howard Cosell's was in any house where a sports fan resided. 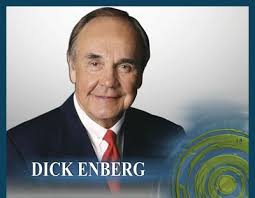 It's funny how you can see or listen to someone who you have never met personally, yet hear or see them so much that you feel as if you have met them and they are a close friend. That's the way it is with me with the voices of both Mr. Enberg and Mr. Jackson. I remember in 1973 when ABC-TV debuted The Superstars, a two-hour special featuring ten top athletes from ten different sports competing in events that were not their own and if memory serves me correctly, Keith Jackson was the host voice. I've watched countless football games called by Dick Enberg who was the voice of baseball, football, tennis and more. They did their jobs well and will be missed.

One never knows the impact on the life of others when he/she is following his or her calling. I believe Mr. Enberg and Mr. Jackson followed their calling and because it was their calling and they did it so well, many lives were made a little brighter when they were on the air during the weekends or whenever they were on.  The two embodied Dr. King's quote as they called sporting events like Michelangelo painted, Beethoven composed music and as Shakespeare wrote poetry. Like others who have passed before them and came into our homes on a weekly basis, their voices will be missed. My condolences go out to the Enberg and Jackson families.

Whatever it is you are called to do, do it well. Something to critically think about on this eighty-ninth birthday of the Rev. Dr. Martin Luther, King. Jr.

This Speaks For Itself - No Words Needed From Me