This ridiculous story about former East St. Louis police chief Michael Baxton below is why Senator Rick "The Blah People" Santorum, Governor Mitt "In Quiet Rooms" Romney  and Former Speaker of the House Newt "Food Stamp President" Gingrich feel that they can speak so brazenly about "Black People."

The idiocy of the police chief in this story speaks for itself. 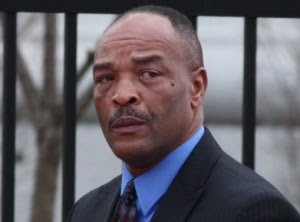 To be clear, the 360 is not standard issue equipment for the Feds these days. Officials had them in the car as part of a sting operation after suspicions arose about the chief's conduct.
Baxton, who faces up to 15 years in prison and a fine of up to $500,000, came under suspicion of offering preferential treatment to some suspects and stealing/selling items from the evidence locker. That's when the FBI decided to test him.

Agents bought five Xbox 360s, put them in the trunk of a car, then reported the car as being stolen. Baxton and another officer responded to the call -- and sure enough, when they saw the Xboxes, the chief ordered the officer to put four in his car and keep one for himself.
"Unbeknownst to Baxton, the unnamed officer voluntarily came forward to report other acts of misconduct occurring in Alorton and had been assisting the federal investigation from its inception. The unnamed officer was equipped with covert surveillance devices at the time of the theft -- and he audio and video recorded the entire incident," reads the court record.
Officials tracked one of the Xboxes and found it being used in Baxton's basement. But the U.S. Attorney overseeing the case said Baxton lied and tried to frame another officer when confronted

Baxton's attorney calls the incident a "monumental lapse of judgment."
Ironically, this isn't the former chief's first brush with the other side of the law. It turns out Baxton had two felony convictions from 1982 before he was appointed: one for theft and another for burglary. Those convictions were expunged in 1989. The town really can't catch a break when it comes to law enforcement officials. Baxton, after all, got the job of chief when the former chief was convicted of federal tax crimes.

Tim Tebow Can't Lose with What He Uses


Tim Tebow: Everything in Between Interview & Production Outtakes from FCTN on Vimeo.


It has been interesting to see how everyone has reacted to twenty-four year old Tim Tebow, the former University of Florida Gator quarterback and now NFL Denver Bronco quarterback who touts Romans 8:37-39 and John 3:16 on his website. Truth be told, the world and “the world” in religious vernacular don’t quite know how to handle Tim Tebow.  I say that because I really don't think folks are truly that interested in Tim Tebow the quarterback, as they are Tim Tebow the boldly professed Christian. All of the hype and talk about Tim Tebow, while it may appear to be about his quarterbacking skills, really is about the fact that he boldly proclaims his faith in Jesus Christ.
Really what folks are trying to do is negate the existence of God/Christ or the power of prayer in order to mock those who do believe. This has truly been seen by the reaction to whether or not the Denver Broncos would either win or lose. Because Tim Tebow was seen on camera praying or in an interview said he sings praise songs on the sideline, many are watching to see whether not all of this has anything to do with the Denver Broncos winning or losing. What they're really trying to do is reduce God and faith in Him to a football game. It's not really about whether they like Tim Tebow or not. What they're really trying to grapple with is whether or not they believe in God or not and if the winning or losing of the Broncos can substantiate their beliefs or give them a reason to scoff.  When the Broncos lost you could see all the commentary on Facebook and Twitter mimicking the fact that Tim Tebow believes in God. You could see the fun that was poked at the fact that Tebow sings praise songs on the sidelines, believes in God and is still a virgin. You could see the world trying to connect the prayer dots with the victory or defeat of the Broncos.  The truth of matter is, folks really are not that concerned about Tebow, but what Tebow has done is challenged what one says they do or do not believe. This challenge is unsettling to many and they mask their discomfort by pretending as if it's about a football game. If you study the Bible you will see that God used all types of personalities, titles, and characters to get his message across. There was Rahab the Harlot; Moses the murderer; David the adulterer; Noah the drunk and the list can go on. I believe God is using Tim Tebow to once again make an attempt to show the world just who He (God) is. Tim Tebow understands this and he knows it is not about him and the world is struggling with that thereby trying to make it about him, a mere for the most part, rookie NFL quarterback.  Tebow knows it is bigger than him. I applaud him for not being ashamed of the gospel.
One can say we have always seen athletes acknowledging God either through pointing their fingers toward the sky upon scoring a touchdown or kneeling to the ground and putting their head down or even during an interview giving God the credit, but very few athletes have proclaimed their faith as boldly as Tim Tebow has both on and off the field. He has unashamedly shared with everyone that he is a Christian and that he is a virgin and intends to stay that way until he is married, something rarely heard of in athletics. A.C. Green shared the same testimony when he was a professional basketball player in the NBA.
God has always had his people to deliver his message to the many who refused to hear it. In fact we see biblically that some of the same if not all of the characters mentioned above delivered the message to people who did not want to hear it nor believe it, but in time would come to see who God is. We see it time and time again in the Bible with the various kings, pharaohs and even the centurion who witnessed Jesus’ crucifixion who according to Luke 23:47 saw what was done, glorified God, saying, certainly this was a righteous man.
Don’t be fooled by all of the Tim Tebow hype, the “Tebowing,” etc. etc.  because other quarterbacks have come into the league and have garnered more or less the same type of attention with the difference being the constant reference to religious faith. I pray that Mr. Tebow continues to stand on his faith and what he believes. I pray that he continues to keep on sharing Christ regardless of the Broncos being in the Super Bowl or in the bowels of their division.  I believe as Mr. Tebow continues to delight himself in the Lord that He shall give Tim the desires of his heart and if that desire is being in the Super Bowl, then one day we will see the Denver Broncos in the Super Bowl with Tim Tebow at the helm. Keep in mind, Tim was not supposed to be quarterbacking this season. He was not the original starter.  I believe Tim commits his way unto the LORD and that he trusts in him and because of that God shall bring his desires to pass and even if he doesn't both me and Tim know that God is still God.  My faith is in God and not in Tim Tebow, but I am cheering for Tim as he has professed to be a cheerleader for Christ.  I’ll be pulling for the Broncos as long as they are not playing my Pittsburgh Steelers and even then I have to respect Tim Tebow. It’s bigger than Tim Tebow.  I welcome your thoughts in the comment section and as always something to critically think about.
Posted by Marc A. Medley at 11:42 AM No comments: