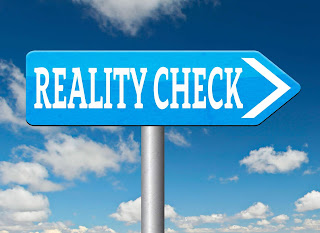 Be realistic. That is what we are told. I think we have been thinking about that advice all wrong all this time. It is actually perfect advice. Let us be realistic for a moment. Thomas Stanley wrote a fantastic book many years ago called The Millionaire Next Door. In this book, he describes the results of several decades of studying the truly wealthy in our country. He interviewed only those who were actually net worth millionaires or better. He talked to them about their habits, their businesses. their philosophies, etc.

What he found out was that most of the people in this country who are living lives of true prosperity are not the folks you see on television. 99+% of these people are unknown outside of their local communities. They are not entertainment stars, tech entrepreneurs, politicians. Most of them own small to medium size businesses in rather mundane industries. Some own welding shops, mechanic shops, bakeries, construction companies. Most of them live in middle-class neighborhoods and drive domestic cars and pickup trucks. Most of them have been married to the same person for a long time and have lived in the same house for decades. They wouldn't be caught bragging about their wealth because they earned it gradually and understand that most of those who brag, do so because of fear that they will lose what they have. Really prosperous folks know they can replace anything that is lost because the simple skills and strategies they used to acquire their things are still with them no matter what happens.

The most common paths to prosperity in our country? Owning a small business. Owning rental real estate. Owning stocks and bonds. Think about that for a moment. Which of these is unreachable to you? Is it unrealistic for you to buy a few shares of stock? You probably already bought one house. Who says you cannot buy another for investment purposes? Heck, there are kids starting businesses today, why can't you?

I will tell you what IS unrealistic. It is completely and utterly unrealistic to think that you are uniquely disqualified from these avenues to prosperity. To think that millions of other people from similar backgrounds and with similar skills and abilities have done these things, but you cannot.
Truthfully, in today's digital world, these are only a few of the avenues available. Now, there are a whole new set of possibilities due to the internet and our connectivity. People are making money with silly videos. People are becoming wealthy playing with toys on YouTube. People with internet blogs are raking money in. All of yesterday's paths are still available and a whole new pile of opportunities are now available also.

If you think that, for some mysterious reason, you alone are destined to be left out, you are not thinking realistically. You are assigning yourself a label that does not make any sense at all. Embrace the reality that you can choose any one, or even several of these paths to prosperity. No one is stopping you but you.

Guest Blogger Art Merrill is an entrepreneur and business owner who has spent forty years reading and digesting self-help and personal finance books while owning and running several small but profitable businesses. He is the author of  Why Not You?: The Old Man's Guide to Prosperity