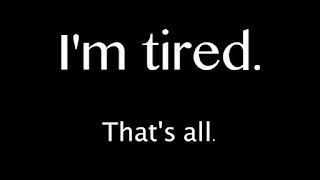 In 1964, Fannie Lou Hamer, one of this country’s greatest folk leaders ever, made famous these humble,
yet powerful words; “I’m sick and tired of being sick and tired.” I say, in 2020; “I’m suffering from a
severe case of rhetoric fatigue.” Different times, different words, same fatigue.

I’m tired of hearing about a few bad apples, or about the good cops. I’m tired of having MLK quotes
thrown at me like smoke bombs. I’m tired of White folks cherry-picking good Black folks to interview. Interview Pence, Barr, McConnell, Graham. Interview Joel O’Steen, not T.D. Jakes. Interview the KKK Grand Wizard, not Kamala Harris or Cory Booker. Give Van Jones and brother Bakari Sellers a break. Give me a break! I’ve heard it all... all my life, and I’m tired of it. And please, Stop Begging! Stop begging evil, hateful folks, for kindness and humanity. Stop it!

If you’re not Black, but you’re human, and you somehow do not understand why we are sick and tired, spiritually and emotionally fatigued, then read the words spoken by Ms. Hamer dating back to the early sixties. If you have a heart, if you have a soul, you may find that you too will feel some degree of spiritual exhaustion, your heart heaving, your soul weak and weary, your eyes swelling with tears. If not, I know I’m supposed to pray for you, but I’m tired. I know I’m supposed to love you anyway, but I’m tired.

I suggest you pray! Study the Beatitudes in the book of Matthew and you pray. I’m tired!
“Blessed are those who hunger and thirst for righteousness, for they will be filled.” Matthew 5:6

These are the words of a simple, but brilliant, and courageous, country girl, who ‘shook up the world’.

“See Mississippi is not actually Mississippi’s problem. Mississippi is America’s problem. Because if America wanted to do something about what is going on in Mississippi it could have been stopped by now. It wouldn’t have been, in the past few years, between 40 and 50 churches bombed and burned. You see, and this leads me to say, you know, all of the burning and bombing that was done to us, and the houses, nobody never said too much about that, and nothing was done. But let something be burned, you know, by a Black man, and then my God. You see, the flag is drenched with our blood. Because, you see, so many of our ancestors was killed because we have never accepted slavery. We had to live under it, but we never wanted it. So, we know that this flag is drenched with our blood. So what the young people are saying now, give us a chance to be young men, respected as a man, as we know this country was built on the black backs of Black people across this country, and if we don’t have it, you ain’t gone have it either, ‘cause we gone tear it up. That’s what they’re saying. And people ought to understand that. I don’t see why they don’t understand it. They know what they’ve done to us. All across this country, they know what they’ve done to us. This country is desperately sick, and man it’s on the critical list. I really don’t know where we go from here.”

“It wasn’t too long before 3 White men came to my cell. One of these men was a state highway patrolman. He said, ‘we going to make you wish you was dead’. I was carried out of that cell into another cell where they had two negro prisoners. The state highway patrolman ordered the first negro to take the blackjack. The first negro began to beat. And I was beat by the first negro until he was exhausted. After
the first negro had beat me until he was exhausted. The state patrolman ordered the second negro to take the blackjack. The second negro began to beat and I began to work my feet. The state highway patrolman ordered the first negro had beat to sit on my feet. To keep me from working my feet. I began to scream and one White man got up and began to beat me in my head and to tell me to hush. All of this on the count of we want to register to become first class citizens. And if the Freedom Democratic Party is not seated now, I question America, is this America, the land of the free and the home of the brave, where we have to
sleep with our telephones off of the hooks, because our lives be threatened daily because we want to live as decent human beings in America. Thank you”

I’m tired, but I still pray for peace, justice, and righteousness! M
That’s what’s on my mind!
Meet Our Guest Blogger Miles Jaye
Singer, songwriter, Miles Jaye, is a native New Yorker; it is there that he studied music theory and classical violin for more than ten years at the Brooklyn Conservatory of Music, Saratoga School for Orchestral Studies and Brooklyn College.
An accomplished musician and producer, Jaye is best known for his chart-topping hits, "Let’s Start Love Over", "Heaven" and "Objective" featuring Grover Washington, Jr. His heart wrenching "I’ve Been A Fool For You" has become one of radio’s favorite R&B classics.
While Jaye laid the groundwork for excellence with his three highly acclaimed CD’s on Island Records, MILES, STRONG and IRRESISTIBLE; he continued that standard of excellence on his own Black Tree Records with titles such as the ODYSSEY, DIVINE ASCENSION, ROMANTIC STORM and HUMANITY.
Under the Miles Jaye Davis Productions label, his extensive training as a classical and jazz violinist is evident on his latest release "ATTENERGY", the voice on the violin which is an exceptional musical “coming out celebration” with sixteen beautifully crafted performances.
Now a Floridian, Jaye enjoys a long-standing reputation as an R&B and Contemporary Jazz writer/producer, having partnered with some of the giants of jazz on his recordings such as George Duke, Roy Ayers, Nat Adderley, Jr., Rachelle Ferrell, Grover Washington, Jr., and Branford Marsalis. The list of notables with which Jaye has shared the concert stages of the world is too extensive to include here.
Jaye is especially proud of writing and producing six tracks on the certified Gold JOY CD from his mentor, legendary R&B singer Teddy Pendergrass. A prolific composer, Jaye has penned and recorded more than 50 original compositions and has the unique distinction of recording no less than 12 different musical instruments on several of his critically acclaimed CD’s.
In addition to side-man duties early in his career for the songstress, Phyllis Hyman, balladeer, Jon Lucien, and jazz guitarist Eric Gale, Jaye served two years as lead-singing Cop for the hit pop group that brought you YMCA, Macho Man and In the Navy - THE VILLAGE PEOPLE.
Jaye is also a novelist, playwright, art student, and an award-winning journalist. He is an active supporter of campaigns for AIDS Awareness, Breast Cancer research, and an advocate for victims of domestic violence. He also actively supports arts education in public schools.
Miles Jaye Davis, like his namesake, legendary trumpeter, Miles Davis, is one of music’s most gifted, distinctive and dynamic artists.

Email: milesjaye360@gmail.com
Posted by Marc A. Medley at 8:00 AM No comments: