When We Place Conforming to a System Over People 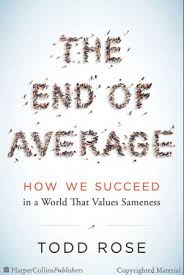 "Excellence too often is not prioritized over conforming to the system, yet we want to be recognized for our individuality."

I begin this post with the quotes by author Todd Rose to generate thinking and reflection concerning the notion of we as a society placing systems and standardization over people. In my January 18, 2016 post (see Flint, Michigan's Water Problem is Another Example of Placing Money (Profit) Over People), I wrote how we in too many instances place profit over people and now I am asking us to tackle the ramifications of our placing a system or systems over people. Now let me caveat this early on with the fact that I am not against taking a systematic approach to obtain a desired result; however, I am against prioritizing a system over individuals. The system in and of itself should never become more important than a person or the people.

I experienced a combination of events causing me to write this post. I've had numerous conversations with people sharing how they feel that their creativity and ability to apply methods that they know through education and experience will work to obtain a certain goal is being overridden by a one-size fits-all cookie cutter system/process. I see it every day in education where students are tested ad nauseum to the point that we no longer foster a love of education but a fear of education. Frustration levels among employees are high as the words in a rubric are used literally to determine an evaluative rating. Then I began listening to the audio book version of Mr. Rose's book THE END OF AVERAGE: HOW WE SUCCEED IN A WORLD THAT VALUES SAMENESS.

While I have not completed the book, what I have learned so far has been eye opening to say the least.  I was not aware of the term"Taylorism"  until this book. By definition, Taylorism is a theory of management that analyzes and synthesizes workflows. Its main objective is improving economic efficiency, especially labor productivity. It was one of the earliest attempts to apply science to the engineering of processes and to management. Its development began in the United States with Frederick Winslow Taylor in the 1880s and '90s within the manufacturing industries. If we were to parallel the objectives of the manufacturing industries with education today, the main objective for educators would be to improve student's standardized test scores.

As I am making my way through THE END OF AVERAGE, I cannot help but to mull over how Albert Einstein eloquently reminded us to think twice before measuring ourselves (and others) against inappropriate standards with his thought that "Everybody is a Genius. But If You Judge a Fish by Its Ability to Climb a Tree, It Will Live Its Whole Life Believing that It is Stupid."

If the ability to climb a tree is a metaphor for standardization and the fish is symbolic of our individuality (students, teachers, employees, etc. etc.), are we not prioritizing the conforming to a system over the various talents and skills that are within each individual?

Alfie Kohn wrote THE CASE AGAINST STANDARDIZED TESTING in 2000 and an excerpt from the synopsis of the book reads as follows:


Our students are tested to an extent that is unprecedented in American history and unparalleled anywhere in the world. Politicians and business people, determined to get tough with students and teachers, have increased the pressure to raise standardized test scores. Unfortunately, the effort to do so typically comes at the expense of more meaningful forms of learning.

Without a doubt, systems and systematic approaches have its place,but there must be a balance between the letter and spirit of the system. We are reaching a point of diminishing returns. Caitlin Emma wrote an article titled Education Department: Too much testing, partly our fault in the October 24, 2015 edition of Politico.  An excerpt from the article appears below:


The Education Department took some of the blame for the sometimes stressful, excessive and time-consuming testing at many schools and said Saturday that it hasn't done enough to help states tackle the problem.

The Obama administration is responding to loud complaints from across the country about how much time students spend on testing and the dozens of consequences now associated with poor results on those exams for students and teachers — policies it had a hand in expanding. Schools have taken on a "test-and-punish" culture, advocates say, a movement that got underway with the 2002 No Child Left Behind law.

"In too many schools, there is unnecessary testing and not enough clarity of purpose applied to the task of assessing students, consuming too much instructional time and creating undue stress for educators and students," the plan says. "The administration bears some of the responsibility for this, and we are committed to being part of the solution."

The department issued a "testing action plan" with recommendations and proposals for cutting back on testing that include easing up on the widely criticized use of student test scores in a proposed rule about evaluating training programs for teachers.

It seems as if humans, the part of any equation that should have top priority are always last and to really throw salt in an open wound, we [humans] are last under the guise of what is being done is best for us or in our best interest, when in reality it is not. This is clearly seen as we continue to value profits and systems more than people.

For further insights, I highly recommend reading Mr. Rose's book and then reflecting upon the impact the average-size-fits-all model (standardization) has on our ability to recognize individual differences and talents. Refer to Einstein's thoughts on judging a fish to climb a tree. Something to critically and reflectively think about.

You are invited to join me live each Saturday at 6:00 a.m. eastern time as I host The Reading Circle which is web streamed around the world on gobrave.org and is heard locally in northern N.J. FM radio WP88.7 FM. You are also invited to follow me on Twitter @thinkcritical01 and @readingcircle01.