February 21, 2015 Marks the 50th Anniversary of the Assassination of Malcolm X

Malcolm X was murdered 50 years ago today in the Audubon Ballroom in New York. Malcolm founded the Organization of Afro-American Unity (OAAU) after leaving the Nation of Islam. Can you imagine what might have occurred if the Organization of Afro-American Unity and the SCLC and other groups had joined forces? Something to critically think about.  Rest in Peace Malcolm.

"My Alma mater was books, a good library... I could spend the rest of my life reading, just satisfying my curiosity."  Malcolm X
Posted by Marc A. Medley at 7:43 PM No comments: 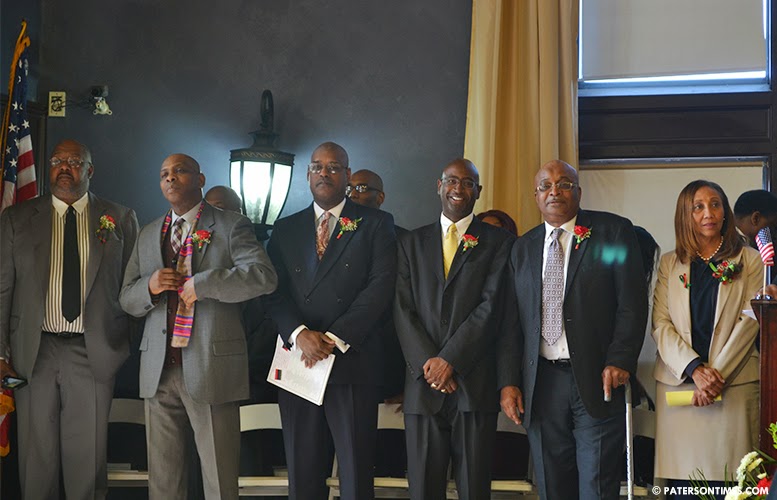 “I think about black history and the struggle our ancestors went through, the hard times they went through, and I always say that no matter what I do in life I hope they are proud of me for what I’ve done,” said Ruby Cotton, 4th Ward councilwoman, who served as the mistress of ceremonies.

Council members expressed their appreciations and a sense of proudness by recognizing four city activists, three educators, a theologian, and a social worker.

Community activists recognized were: David Gilmore with the Medgar Evers award; Dwayne Cox with the Jesse Owens award; Ernest Rucker with the James Forman award; and Gerard Burns with the Ralph Abernathy award.

Psychologist and social worker Kelley Moss-Brown was recognized with the Inez Beverly-Prosser award.

Medley, like Douglass, has been on a crusade to promote literacy in the African-American community. Medley said he was moved to promote literacy after reading a poster inside the abolitionist’s home in Washington D.C. which read: “Once you learn to read, you will be forever free.”

Council president Julio Tavarez, who nominated Medley, was absent from the ceremony. In his place Andre Sayegh, 6th Ward councilman, handed the award to Medley. Tavarez’s absence garnered a strong negative reaction from the audience, when it was announced the council president couldn’t make it. One audience member blurted out: “Not surprised.”

“We take pride in our own African-American men and women who overcame insurmountable obstacles and achieved great success” said mayor Jose “Joey” Torres. Torres listed a number of city residents who went on to overcome racism to obtain success. He listed Larry Doby and Johnny Briggs, both of whom made it to major league baseball by cutting through the color line.

“Change was made when William “Bill” Mason led the Charter Study Commission that changed the form of government to our current Faulkner Act Plan D,” said Torres. Mason was a 4th Ward councilman from 1974-76.

While Torres was reading off his list, William McKoy, 3rd Ward councilman, donned a Nigerian garb, to bring some “authenticity” to the ceremony which began at 11:30 a.m. and continued into the afternoon.

“We don’t do what we do to receive awards,” said Medley, a principal at the Frank Napier Academy, a school named after the city’s first African-American school superintendent. “We do what we do to make life better for others and the awards come as a byproduct.”
Posted by Marc A. Medley at 10:39 PM No comments:

Some Thoughts on Valentine's Day and Black History Month

You are invited to join me each Saturday at 6:00 a.m. ET on gobrave.org and WP88.7 FM for The Reading Circle with Marc Medley. Each week I interview authors from around the world to offer unsurpassed book talk radio. I also invite you to follow me on Twitter @readingcircle01 and @thinkcritical01.
Posted by Marc A. Medley at 2:53 PM No comments:

All We Need Is LOVE

McDonalds and Coca-Cola got it right during the Super Bowl! I know it's not grammatically correct to use "got," however, their latest campaigns hit on something that the world is sorely lacking and that is LOVE. McDonalds got it right with their Lovin campaign and Coca-Cola got it right with their #MakeItHappy ads encouraging positivity. Interestingly, video game ads such as Game of War - Who I Am and Clash of Clans were about violence, war and fighting. It was noted and observed by many that there seemed to have been a shift in this year's Super Bowl ads away from the predominately humorous ads that we've become accustomed, to more emotional messages such as those mentioned above. Even fathers for once were made to look good instead of being made the brunt of the jokes in campaigns for Nissan, Toyota and Dove.With a world filled with violence, it was good to see major corporations recognizing the need for more LOVE for only love can conquer hate and unfortunately there is too much hate going around.


So, on this February 9, 2015, the fifty-first anniversary of  The Beatles appearing on the Ed Sullivan Show, they had it right too........ALL YOU NEED IS LOVE.   I invite you to follow The Critical Thinker on Twitter @thinkcritical01 and to tune in live each Saturday morning at 6:00 a.m. ET on gobrave.org to hear The Critical Thinker live as host of The Reading Circle with Marc Medley.  Each week we bring to you provocative authors who share their work and also give you something to critically think about.