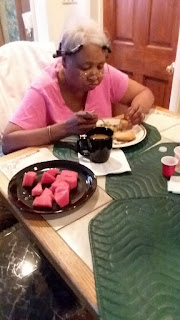 What I think got me the most though was....................(I won't share that here, I'll share the story and let you decide what moves you.)  The story below is from a book written by Robin Sharma titled THE MONK WHO SOLD HIS FERRARI.

"There was once a feeble old woman whose loving husband died. So she went to live with her son and his wife and daughter. Every day, the woman's sight grew worse and her hearing grew worse. Some days her hands trembled so badly the peas on her plate rolled onto the floor and the soup ran from her cup. Her son and wife couldn't help but be annoyed at the mess she made and one day they said enough was enough. So they set up a little table for the old woman in a corner next to the broom closet and made her eat all of her meals there, alone. She would look at them at mealtimes with tear-filled eyes from across the room, but they hardly talked to her while they ate, except to scold her for dropping a spoon or fork.

One evening, just before dinner, the little girl was sitting on the floor playing with her building blocks. What are you making? her father asked earnestly. I'm building a little table for you and mother she said, so you can eat by yourselves in the corner someday when I get big. The father and mother were moved to silence for what seemed like an eternity. Then they started to weep. In that instant they became aware of the nature of their actions and the sadness they had caused. That night they led the old woman back to her rightful place at their big dinner table and from that day on she ate all her meals with them. And when a little morsel of food fell off the table or a fork strayed onto the floor, nobody seemed to mind anymore."

The moral of the story: Compassion and daily acts of kindness make life far richer. Something to think about.